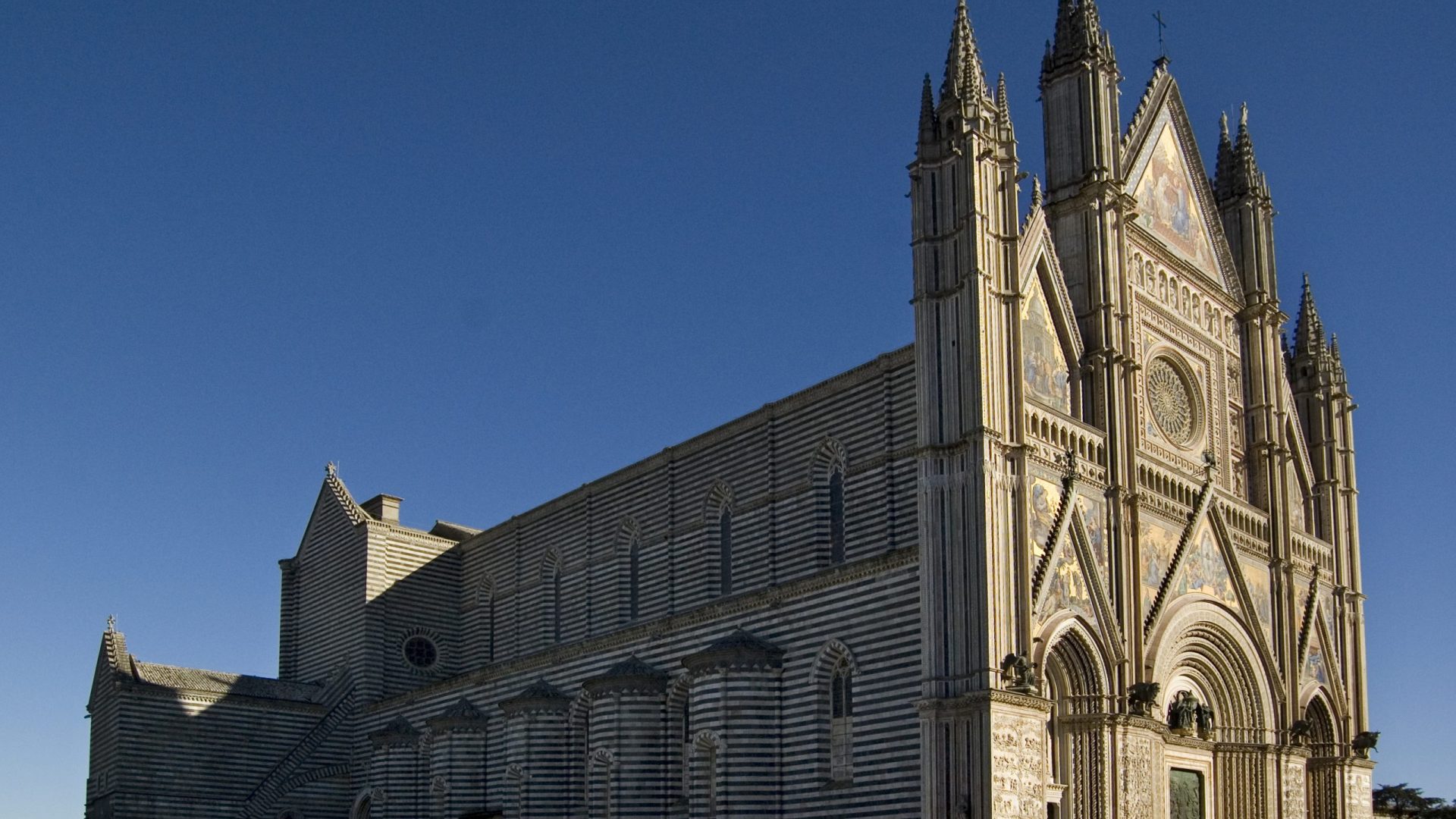 The golden lily of cathedrals

The symbol of the city, Orvieto's Duomo is a jewel of Romanesque-Gothic architecture. Known as the "Golden Lily" of cathedrals for its golden mosaics that illuminate the splendid façade, it is home to masterpieces by Luca Signorelli and Francesco Mochi and the sacred linen of the Miracle of Corpus Domini.

The construction of Orvieto Cathedral began in 1290 at the behest of Pope Nicholas IV. The first project for the design of the façade of the Cathedral is probably to be attributed to Arnolfo di Cambio, who was followed about twenty years later by Lorenzo Maitani. The work went on for over three centuries.

The façade of Orvieto Cathedral is unique in the world for its mosaics and the rose window by Andrea di Cione, known as Orcagna. The general project is the work of Lorenzo Maitani, caput magister of the Fabbrica from 1310 to 1330. He was responsible for the image of the current cathedral, and has since been followed his successors who adopted the model and the indications of the Siena master. The façade is embellished with bas-reliefs at the base of the four spires depicting scenes from the Old and New Testaments (Genesis, Tree of Jesse, Episodes from the life of Jesus and the Last Judgement), while the mosaics depict scenes from the life of Mary: from the Nativity of the Virgin to the Assumption into Heaven, from the Annunciation to the Coronation.

The Cathedral is dedicated to Santa Maria Assunta in Cielo (Our Lady of the Assumption) and the presence of the Virgin is also represented by the bronze sculpture above the central portal, while the other bronze statues symbolically represent the four Evangelists: the Angel (St. Matthew), the Lion (St. Mark), the Eagle (St. John) and the Bull (St. Luke).

The interior of the cathedral has a sober style brightened by the rose window and the large Gothic stained glass window behind the altar. There is a large marble stoup, the baptismal font and, on the left-hand side, the Madonna Enthroned with Child and Angels by Gentile da Fabriano (1425). In the nave, you can admire the entire sculptural cycle of the Apostles and the 4 patron saints “returned” to the Cathedral in 2019 after 122 years of exile.

The statues of the Annunciation by Francesco Mochi have been relocated on both sides of the apse on the main altar. The statues are  a masterpiece of seventeenth-century sculpture representing the Announcing Angel and the Virgin Annunciate. The statue of the Angel is considered the first Baroque sculpture in history.

There are two chapels on the sides of the altar: the Corporal Chapel and the Nova (or San Brizio) Chapel.

The Corporal Chapel, frescoed with works by Ugolino di Prete Ilario and other artists, houses the relic of the Eucharistic Miracle that took place in Bolsena in 1263, which is linked to the institution of the Feast of Corpus Christi. The Tabernacle of the Corporal is also kept and displayed in this chapel. Above the entrance to the Corporal Chapel there is the monumental organ designed and sculpted by Ippolito Scalza, while the sculptural group of the Pietà is attributed to Scalza himself.

In the Cappella Nova or Chapel of San Brizio there is one of the greatest pictorial cycles of the Renaissance started by Beato Angelico and finished by Luca Signorelli. The Last Judgement is a masterpiece by the painter from Cortona, alternating apocalyptic and redemptive scenes. The theme and the depictions created by Signorelli inspired Michelangelo to create the frescoes in the famous Sistine Chapel. 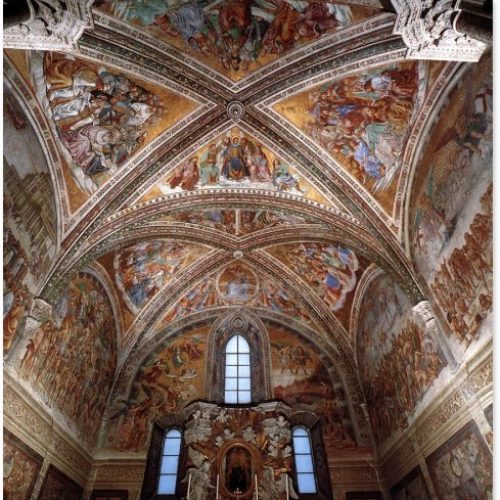 The basement of the Cathedral of Orvieto

The history of the cathedral

The treasures of the cathedral

The casket of the Corporal's reliquary