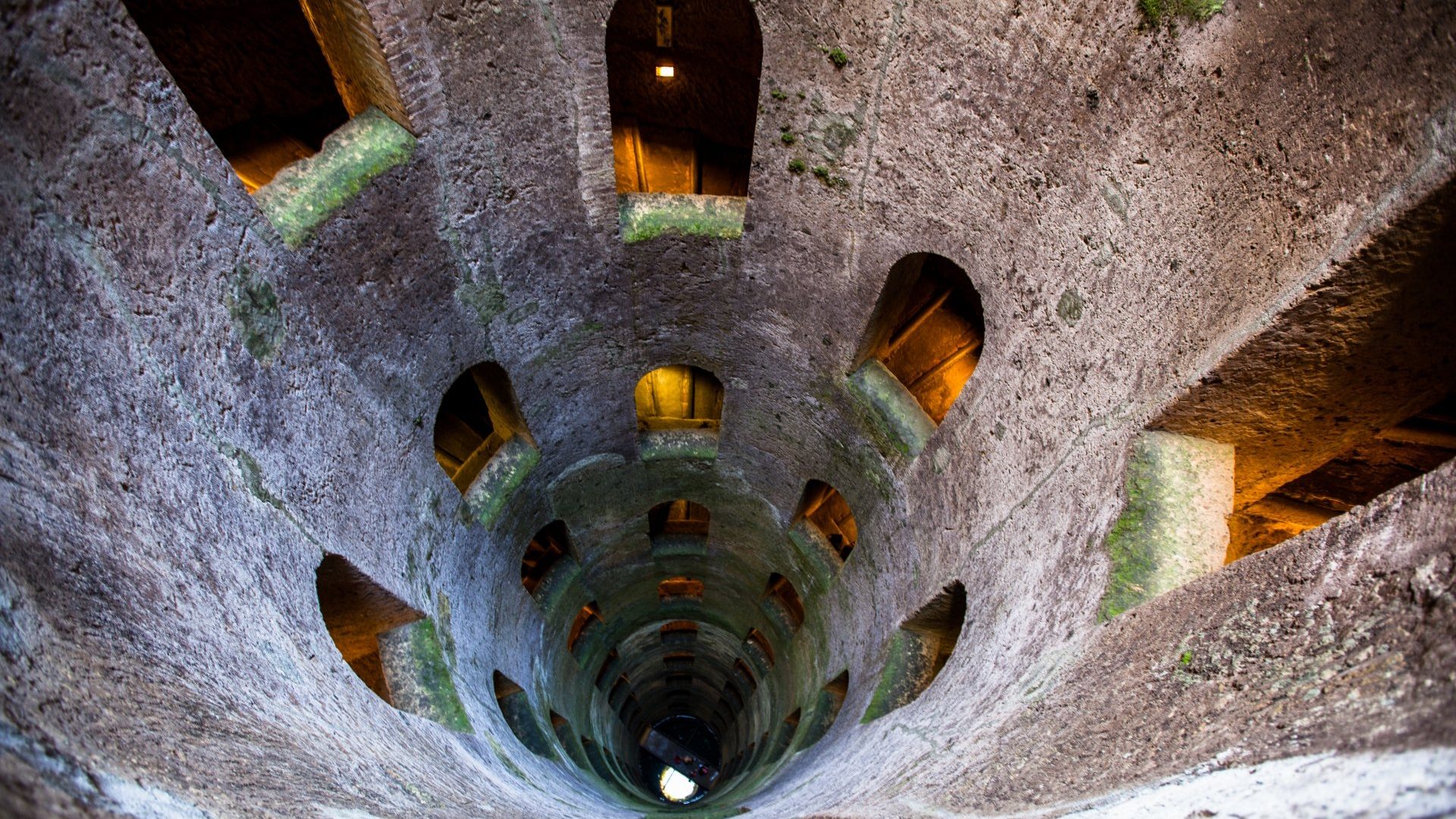 One of the most complex and fascinating engineering works of all time, an example of a challenge won by man over nature.

St. Patrick’s Well, a masterpiece of Renaissance engineering, was requested by Pope Clement VII, who had taken refuge in Orvieto after the “Sack of Rome” by imperial troops and the Landsknechts, to supply the city with water in case of siege. The task of building the well was assigned to Antonio da Sangallo il Giovane in 1527.

For the construction of St Patrick’s Well, Pope Clement VI commissioned Benvenuto Cellini to mint a medal with the inscription “Ut bibat popolus” (“so that the people may drink”), representing Moses striking a rock with his rod from which water gushes out in front of the fleeing Jewish people, while one of them draws water from it with a shell. Exemplars of the coin are kept in the Vatican Museums in Rome and in the British Museum. The work was completed in 1537 under the papacy of Paul III Farnese.

Initially called ‘della Rocca’ because it was close to the Albornoz Fortress, the well was later renamed St Patrick’s Well because its depth was compared to the cave on an island in an Irish lake, where the Saint went to pray. Legend has it that this cavity was so deep that it was the gateway to Purgatory.

The well is about 54 metres deep and has a double spiral staircase structure with 248 steps, 13 metres in diameter and is brightened by 72 round-arched windows through which light filters, reflecting particular shades on the outer wall carved into the stone. This ingenious structure created by Sangallo allowed pack animals to go up and down the stairs to fetch water without ever meeting.

Going down the well, near the bottom, you can see a curious little door. From here, passing through a narrow tunnel dug into the tufa, one arrives near the fountain of San Zero, below the cliff. The fountain is connected to the outflow that ensures a constant level of water at the bottom of the well from a natural spring. It is said that, in addition to its original function, this tunnel also had an important purpose: to provide a quick and safe escape route for the Pope in case of danger.

At the entrance there is still the inscription that, at the end of the work, expressed all its greatness: “Quod natura munimento inviderat, industria adiecit” or “what nature did not do, artifice added”.

Next to St Patrick’s Well, connected by a recently recovered passageway, is the Albornoz Fortress or Rocca Albornoz, built from 1364 onwards at the behest of Cardinal Egidio Albornoz, and destroyed in 1390 while the city was experiencing a period of tumultuous internal struggles. In 1450, under the control of the Papal State, the fortress was rebuilt and continued to have its original function as a military defence structure until the end of the 1800s. The fortress became a meeting place for events thanks to the presence of an amphitheatre inside it, characterised by tiers and stages where events were held.

Today the fortress is home to the public gardens and is the birthplace of Orvieto’s journalist Luigi Barzini, the first special correspondent in the history of journalism. From its walls you can enjoy a beautiful view of the valley below and a connecting path has recently been created between the Rocca and the Pozzo di San Patrizio.

The stronghold of the Popes