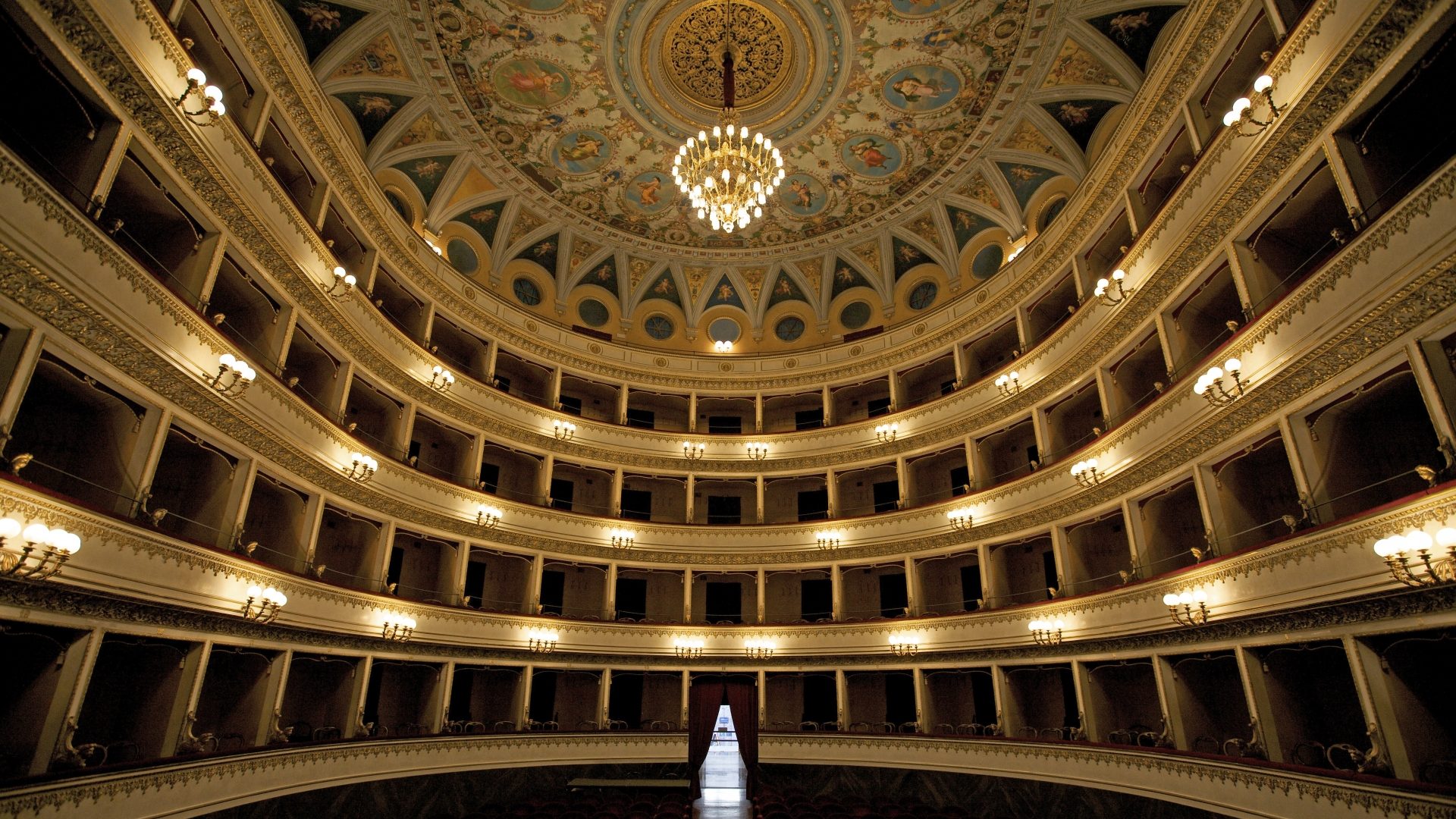 Entrusted to the famous Roman architect Virginio Vespignani, the architectural structure in full neoclassical style was completed in 1863 and on 1 May 1866 the city finally saw the poster for its first theatre season.

In the lobby, the three Muses, inspirers and protectors of the arts, to whom the theatre was initially dedicated – Thalia, Melpomene and Euterpe, invite you to come in and watch a timeless show. The first opera staged was Gaetano Donizzetti’s La Favorita. It was on 19 May 1866.

Entering the stalls and raising your eyes to the ceiling you can see surprising colours shades, shapes and figures harmoniously surrounding the elegant “Dance of the Hours” at the centre of the ceiling. The decorations were executed by Annibale Angelini from Perugia and the young Roman artist Cesare Fracassini.

Fracassini was also responsible for the pictorial decoration of the Historical Curtain, made in just 40 days and depicting the expulsion of the Goths from Orvieto by General Belisarius in 535 AD.

Two diametrically opposed staircases lead to the four tiers of stages. Along the route it is possible to admire on one side the busts of Vespignani and Fracassini, and on the other the busts of the brothers Luigi and Marino Mancinelli, both Orvieto’s world-famous conductors and composers, to whom Orvieto’s theatre was dedicated in 1922.

The building reaches the peak of its elegance in the three entirely frescoed halls on the third floor or piano nobile: the foyer in the centre, the blue hall and the yellow hall on the sides, named after the colour of the walls. Once the dining and entertainment room of aristocratic families, it now hosts conferences, concerts, special shows and weddings.

At the end of the last century, the theatre was in very poor condition, the paintings were badly damaged and the bad conditions of the sound boxes compromised the acoustics.

Restoration work began in 1991 and was completed after two years.

In 1993 the Mancinelli Theatre was finally returned to the city in its full splendour and since then it has welcomed a varied and enthusiastic public.

The golden lily of cathedrals